The Epping Baseline: A Brief History

Have you ever wondered how the early maps of the Atlantic coastline were developed? The answer can be found right in our backyard. Known as the Epping Baseline, the 5.4-mile stretch of gravel road located in the blueberry barrens of Washington County, Maine, holds significant importance in the history of surveying, and you can experience it for yourself!

Located off route 193 in Cherryfield is the Epping Baseline, the only remaining remnants of an ambitious land surveying project that opened doors for future mapping.

In the mid-1850s, the US was emerging as a world power, and Thomas Jefferson recognized that the Atlantic coastline needed to be measured more accurately for shipping lanes and homeland protection. To do so, a system created by Ferdinand Hassler, the first superintendent of the U.S. Survey of the Coast, was adopted.

The system included a network of triangles from the mountaintops of the Appalachians down to the Atlantic coast, spanning from Alabama to Maine. The triangles included six baselines. Chosen baseline sites were commonly coastal beaches because the land was open and unobstructed for several miles. It was also necessary that the ends of these baselines had visibility to the mountaintops. That way, once survey crews worked on measuring baseline lengths (one side of the triangle) and the angles from the endpoints to the mountains, the missing angles, and lengths of the triangle could be calculated.

The Epping Baseline is the only surviving Atlantic coast baseline. Erosion and development along the shoreline have destroyed the baselines from Alabama north; however, Maine’s coastline is incredibly rocky, so the chosen baseline site was 6-7 miles inland and has so far evaded development.

Today, visitors can walk the same stretch of land as the original surveyors and experience some history firsthand. The remnants of the western monument are held at the Maine State Museum in Augusta.

What were the measurements used for?

The baseline holds significant importance in the development of early maps. The geometric basis of the measured baseline was used to create early topographic maps and gave the first accurate baseline of the Atlantic seaboard.

Technology has certainly changed how we survey, but the hard work and ingenuity of the original team of surveyors helped shape our industry today and gave the world the first glimpse of our beautiful coastline.

For more information on technological advancements in surveying, check out our blog here. 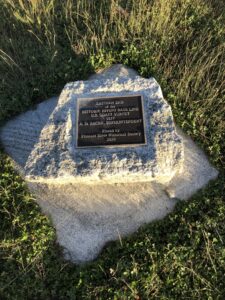