A Day in the Life of a Surveyor 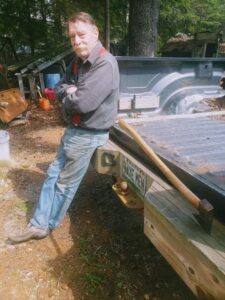 As I pulled into the curbside pick-up spot a younger man stepped out to assist me. I gave him my name and he took off to find my order while I opened the trunk of my car to accept the several boxes he promptly returned with. When I opened my trunk I had noticed my axe, which we as surveyors use for just about any job in the field to cut line of sight so our equipment can shoot distances, lying right there as clear as day. As the young man approached, I had a quick panic whereby I couldn’t decide if I should try to hide the axe and in doing so look a little suspicious, or just leave it lying there and not make a big deal about it. As soon as I convinced myself that doing nothing was the best plan of attack, the panic left my mind. Seconds later the man began placing the groceries in my trunk and it became immediately apparent I’d made the wrong decision. His body language hinted hesitation – should he put the groceries on top of the axe, or where? He ended up placing the groceries alongside the axe, leaving it uncovered, and I thanked him, feeling the awkward situation was behind us. But, no. As he started to walk away, he quickly turned back and said to me, “You know it’s not every day you see a sharpened axe in the back of someone’s car…” I quickly said I was sorry and told him I felt bad I didn’t cover it over, but should have, and then started justifying that because I was a land surveyor, it was just something I generally carry around with me wherever I go. Satisfied with my answer, he then walked away.

When I joined Herrick and Salsbury in 2007, I was trained by an old-timer for which I will be forever grateful. His lessons and guidance help me in every way and every day of my profession. And here was yet another one of those lessons, that he’d taught me, and I’d learned by observation. However, it became overtly obvious to me on this day that I had failed to bring this lesson into my practice.

Typically when a crew from Herrick & Salsbury arrives on your doorstep to announce their arrival and commencement of fieldwork, it is commonplace to also knock on all the neighbor’s doors to let them know who we are and what we’re doing. Let’s face it, it just seems courteous and simpler than having your clients’ neighbors call the police wondering what some stranger is doing in their back yard. And so job after job, I would watch this old-timer get halfway to the doorstep only to return to the truck to leave his axe on the tailgate, and head back to the doorstep to introduce himself.

The lesson? People do not handle seeing someone walking around with a sharpened axe. Probably pretty, obvious, but to the all-engrossed surveyor, excited to start a new job, the axe in their hand all too easily becomes a detail they fail to recognize as offensive to others.

More than a decade later, I’ve now, thanks to curbside pick-up, got this lesson down.

If you ever see an old-timer driving around in a truck with Maine plates, “AXE MEN”, thank him for me, please.