We get a lot of questions regarding boundary surveys.

In short, a boundary survey is a process of using professional judgment to place the location of property lines on the ground. A survey is a snapshot in time. If a plan is prepared, the improvements shown are the improvements at the time of the survey. After the surveyors have left the property, a neighbor could create an encroachment, a new fence could be installed, buildings built or added onto, driveways built or enlarged or the property could be divided and a piece of the property sold. If nothing ever changes and no land is sold, then a survey plan would continue to reflect and convey the correct information. Once a conclusion is reached, boundary lines and property corners not already monumented will be marked with new iron rods at the corners and oftentimes wooden stakes set or blazed trees made along the boundary lines. A final plan is typically made, by our team, for the client at the end of the process. 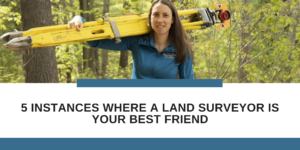 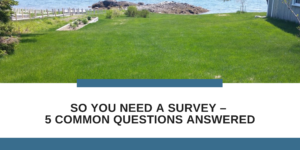 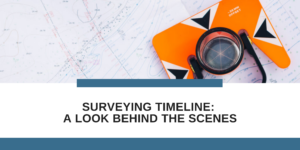 The client was getting ready to sell their home and we were contacted by their real estate broker to survey the land as a contingency of the sale. The client and the client’s neighbor were related and were both conveyed land by a third family member. It was discovered that some of the improvements made by the client were on the land of the neighbor’s and some of the neighbor’s improvements were on the land of the clients. Through mutual agreement, a boundary line agreement was created to place the improvements on the proper parcels of land so the sale of the client’s land could go through. This is a common occurrence when land is given or sold by family members to another family member. Many times boundaries are either not well defined, boundaries are not honored/respected or a casual indifference between family members causes improvements or entire homes to be built on the wrong property. If purchasing property and you know that family either border the property or were involved with dividing property, it should be a huge red flag.

In another family situation, parents had gifted land to one of their adult children without a proper survey. The property was surveyed in anticipation of building an addition onto the house. It was discovered that a detached garage was not on the child’s property. Since the land in and around the garage was still owned by the parents, additional land was conveyed to the child to correct the situation. Because it was family land all around, nobody really cared exactly where the boundary lines were located. It was a pretty easy fix but could have been a real problem if the parents had sold their land and the new owners were not willing to convey additional land.

Learn more about the process of surveying by clicking this button!

A Deeper Look at Boundary Surveying

Generally, land surveyors are interpreting the legal description contained within the property deed or re-creating the geometry of a lot as shown on a subdivision plan.

The plan and/or pins represent the property boundaries at that moment in time.

Boundary surveying is regulated by a licensing board within the State of Maine Department of Professional and Financial Regulations, Board of Licensure for Professional Land Surveyors and is defined as:

Any service or work involving the application of special knowledge of the rules of evidence and boundary laws, principles of mathematics and the related physical and applied sciences for measuring and locating lines, angles, elevations, natural and man-made feature in the air, on the surface of the earth, within the underground working and on the beds of bodies of water. This service or work shall be for the purposes of determining areas and volumes, for the monumenting of property boundaries and for the platting and layout of lands and subdivisions of land, including topography, alignment, and grades of streets and for the preparation and perpetuation of maps, record plats, field note records and property descriptions that represent these surveys.

The surveyor will research the records of the local county registry of deeds for property deeds and recorded plans, trace the history of the subject parcel and look for any encumbrances that affect or benefit the subject parcel such as rights of way or easements.

Before during or after the deed research is completed, surveyors will visit the property and locate the existing boundary evidence, improvements, fences, stone walls that are on or near the property. Lines of occupation (fences, lawn) are observed and located on either side of a boundary line if the occupation is close to the boundary line. A surveyor may talk with the landowner or the neighbors to hear and accept their knowledge or opinions of the boundary line locations. Sometimes this is referred to as parol or oral evidence. Many times a neighbor will offer a copy of their survey plan. In Maine, the majority of survey plans are not recorded at the registry of deeds.

As evidence is gathered, the evidence is mapped and compared to the record ownership (record ownership refers to the principal of the ownership as described in the deed description, as in what is on record at the registry of deeds). This analysis includes the application of principals such as the priority of calls within a deed. In Maine, Supreme Court case law over the years has provided the priorities of calls in this order: Monuments (both physical and non-physical monuments), courses (direction), distances, and lastly the quantity (acreage) of the property. [ME 1983 Conary v. Perkins 464 A.2d 972]

There are presumptions (Presumptions are facts in the eyes of the law), inferences (Inferences are deductions or conclusions which with reason and common sense lead the surveyor to draw from facts which have been established by the evidence in the case), doctrines (follow the previous surveyor’s footsteps) and principals (priority of calls) to consider in order to render a well-reasoned opinion that a reasonably prudent surveyor would find, evaluating that evidence on the record location of the existing property line(s).

Once a conclusion is reached, boundary lines and property corners not already monumented will be marked with new iron rods at the corners and oftentimes wooden stakes set or blazed trees made along the boundary lines. A final plan is typically made for the client at the end of the process.

Have more questions about boundary surveying? Check out our FAQs.

What Our Clients Say

Have questions about boundary surveys or what to expect? Check out our FAQs or reach out via our contact page.